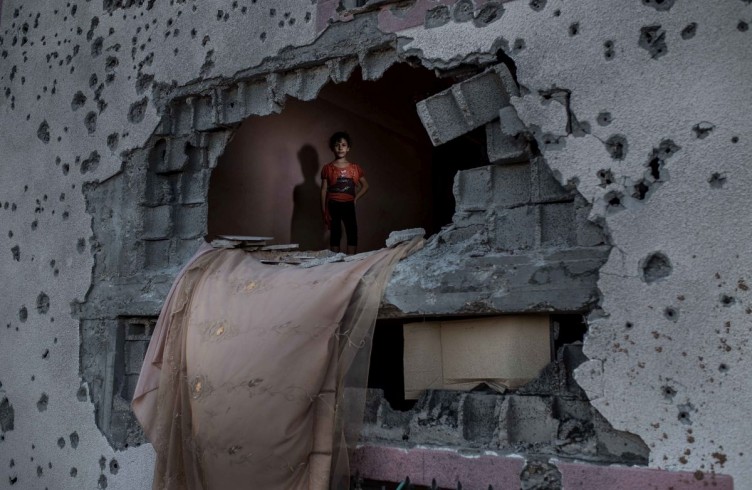 Precisely a year after the last conflict, here is the powerful photographic account of someone who experienced firsthand life conditions in that unfortunate strip of land.

Here are Gaza women, proud of existing and resisting among the debris of their existence. Giuseppe Cabras photographed them in September 2014, in the aftermath of the ceasefire of the last conflict, the third in the area, whose first anniversary will be in July. It was indeed July, 8th 2014 when the Israeli forces launched the operation “Protective edge“. 51 days of conflict and a ceasefire signed in Egypt at the end of August, still unbroken. No real peace treaty on the horizon, nor real reconstruction, in spite of the commitments undertaken. According to a UN report, the toll of the conflict was 2.200 casualties among the Palestinians, 1463 of which civilians, one third of which were children. On the Israeli side, 73 casualties, mostly within the army, 1.600 injured. Not more than 360 square kilometers, more than 1,8 million inhabitants, 43% of which aged between 0 and 14. This is Gaza Strip.
The embargo proclaimed by the Israeli authorities after the second Intifada led to an increase in unemployment rate, 38% of the population live below the poverty threshold.
According to IDF official blog (Israel Defense Forces) the last conflict was a due reaction to the continuous missile attacks by Hamas. “Actually, – Cabras, who went to the strip more than once, stated – Hamas has very weak missiles, they all end up in the buffer zone. Only one caused serious damage, hitting a petrol station near the border”.
It is difficult to understand how such sophisticated weapons may have eluded Israel’s controls and penetrated in the Gaza Strip, even if even drones have been mentioned.
What is certain is that the powerful portraits taken by Cabras seem from movie set about World War II taking place in Warsaw’s ghetto, except for clothing.
“The population is really friendly, going around Gaza and collecting accounts is easy- the reporter continued- during the last conflict the city was not particularly targeted. The most considerable damage was the destruction of two skyscrapers, one was hosting the television, the other Hamas offices, while the urban conglomerations in the surroundings, born from the stabilisation of refugee camps, were severely struck .”
In the crossed buck passing and declining of responsibilities, if people’s sufferance is there for those who have the authorisation to see, Israel’s authorities accuse Hamas to use the civilians as shields.
And the stances are all but transparent, since a recent report by Amnesty International denounced Hamas for their regular violations of human rights towards the Palestinians.

Previous post:
Dario Argento and the Goblins: dreaming with fear Next Post:
Alessandra Ferri, in “her own way”

One Response to Women of Gaza – Photo feature by Giuseppe Cabras