The hands’ gesture in the vision of Francesco Clerici 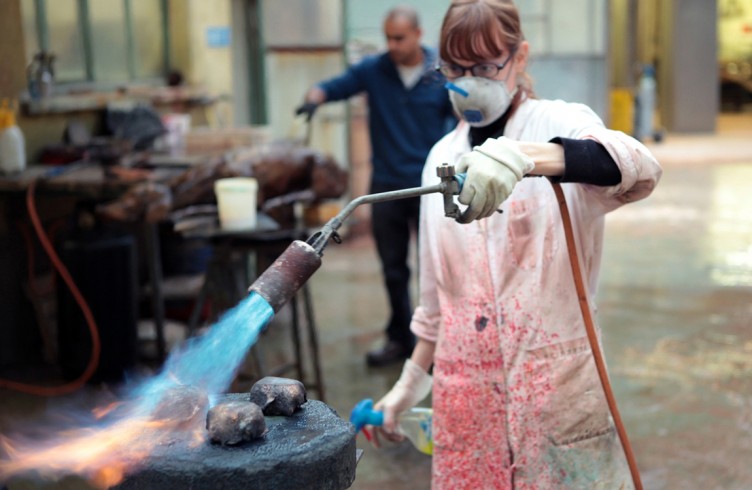 As Benvenuto Cellini reports in a well-known page of his life, here is the flux bronze. Thanks to his first documentary, “The hands’ gesture”, Francesco Clerici was selected for the past Berlin Film Festival, where he gained an important critic reward prize: the FIRESCI prize.

We met him for an interview. 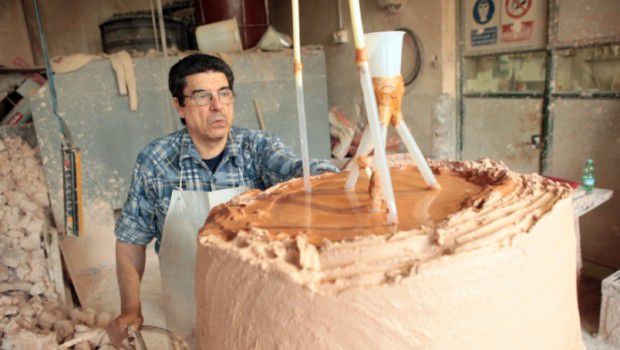 Francesco Clerici is a young Italian film director, he’s always been productive as a cultural promoter for some laboratories and settings at Cineforum, in the surroundings of Milan.

The realization of this project succeeded thanks to a team of young passionate people, as Clerici himself: he surprisingly was selected for a secondary section of the past Berlin Film Festival and was, after that, prized with the FIPRESCI prize, which is issued by the International Cinematographic Press Federation. We had an interview with the author, who explained us how this particular film and his delicate theme were born.

Could you explain in a clear way how the project was born? Where did the idea of following the works in the foundry come from?

The project took form thanks to many factors, related the one with the other. The genesis is very simple on the narrative level: I’ve been working with Velasco Vitali for 5 years he’s a contemporary artist who really pays attention to the best transposition of an idea (of an artistic concept or intuition), to the most fitting matter and realization (in picture as well as in sculpture).

While collaborating with him professionally, I’ve put myself in contact with the foundry in Battaglia. It was 5 years ago already: this place was fascinating for me, as it can be for everyone. Just in 2013 I followed the realization of one of these sculptures: form the wax (he re-models it, paying attention to every detail) to the final patina, through quite mysterious and fascinating landscapes, in my opinion. Most gestures have no time and still exist since the medieval era and scenery, they caress these landscapes. After two weeks at work and dozens of fleeting sculpture, the author obtained a final result, that can only be seen in his finished version.

The fusion of cera persa is a form of resistance to progress and to history, you can say that through images, most of the times. And, by doing that, you’ll carry with you a rare form of non-written document, that I really like. 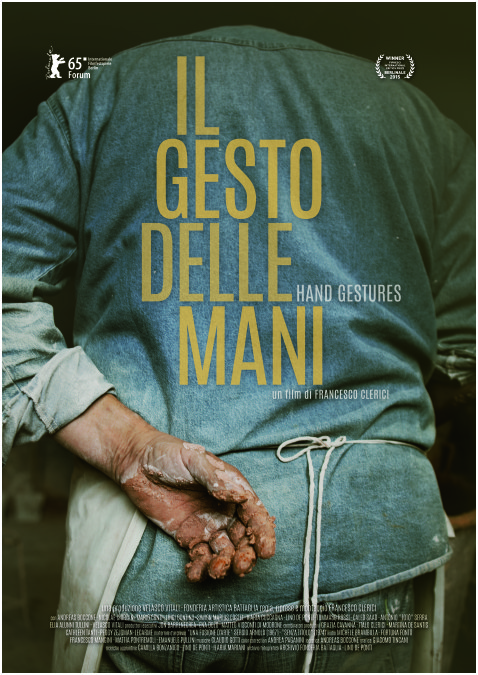 How long have you been working on that?

The shooting began on September 2013, they ended exactly one year later. To tell the truth, I went back there to record, in November, one last 10-minutes-framing (an old Buster Keaton’s photo, cut out from a newspaper, together with little wax balls, on one column) .

Later, we began the audio recordings with the boys (Mattia Pontremoli, Fortuna Fontò, Emanuele Pullini, Francesco Mangini e Michele Brambilla). They did an excellent job on the audio, they recorded every detail and every scenery, singularly: the frying wax above hot utensils, the resistant ground, the form that will be put in the oven. We didn’t want to make use of music, except for the final; I needed an optimal audio that could make the foundry “hearable”.

At the beginning of January, everything was ready for the audio mix, created by MM. And, thanks to the help of Andrea Paganini and Italo clerici  (my father) we could send a video to Berlin, on the 22nd of January.

Was the relationship with the foundry’s workers hard?

While I directed, I used to think, do I want to make a video about the foundry? Or do I want to work in there? More than once I had the stimulus of sending my CV and of starting an experience as a trainee. I sometimes still think of that. We’ll see. So, my relationship to the artisans was hypnotic at the beginning and became, later, a friendship. This was, anyway, a progression. Some of them were solitary, reserved people, some of them were a bit wider… I tried to carry any characteristic of these personages in the documentary. I didn’t want to disturb or to invade their spaces so I decided to walk around with a 5d photocamera, a quite little and easy-to-carry camera, with a tripod, without anything or anyone else. And without lights. I tried to find the best shot, while they were working naturally, as they did every day. They told me that: I was the one who had to adapt. This “reality” could give a sensation of more truth to the gestures. They accepted the fact that I was recording them and I, in change, took photos of their works and gave them, later, to the workers. Through this pact, I achieved a better interaction. When they saw the film, they were wondering about how good they were in doing their job (I would say they were shocked but perhaps it’s too much). “Are we that good? How did we get there?” But I did nothing more than showing them!

The team is made up of many young people. Was it difficult to introduce them to the project? Where did you find the money to set up the project?

On the contrary: they we the ones who “involved” me once again in the project. While I’m working, during pauses, in the weekends, I sometimes feel discouraged. I want to format the hard disk in order to work on other paid projects!

For some time it was Martina who who blocked me in extremis: she’s my girlfriend, an actress and (temporarily) co-producer. Then, I asked the audio-technicians if they wanted to take part in this project and it all got easier: they had a great enthusiasm that exited me, too. They carried me. On an economic point of view, I knew I had enough money… I only had to pay attention to great costs, since the film costed 13 000 €, in the end. Velasco Vitali and the Foundry could grant a cover in the costs, ever since the fist steps. They completely trusted me, they let me free to take my own decisions (something I never could have done with a production house). In order to make things easier, I chose to work with colleagues I know from a lot of time (as Claudio Gotti for musics, Giacomo Tincani for graphics).

I let two old friends and executive producers the responsibility of co-ordinating the work: they have a great knowledge of the festivals world, of the distribution and valuation mechanisms for a film with global importance, they all were paid, they all were ready to give their time and professionalism in order to support a project. They all felt a part of this project.

In the film, music is hard to find. How could you explain that?

It seemed to me the most fitting solution, in order to show the foundry not only as the location, but as the protagonist of this story. Every scenery in the film has its proper audio and characteristics, they define the imaginary and ambient-sound, where every worker is moving. The music often has the role of making a passage or moment easier, and of involving emotionally the public. In both cases, the presence of a director is evident and in a certain way creates a filter. And this wasn’t my intention.

Who were the documenters who most inspired you?

I could think about that for hours and say obvious names as De Seta or Wiseman, but I only can admit that they are unreachable examples. I have to mention the one that, actually, unconsciously taught me the most. He presented his last film on the same section of my documentary in Berlin:Nikolaus Geyrhalter. His name was my gmail password, now that I told this I’ll have to change it, but it’s the price for a good background, I hope. He’s not involved in the documentaries, but Buster Keaton is, for me, the departure point for everything… But now I’m talking about something different. 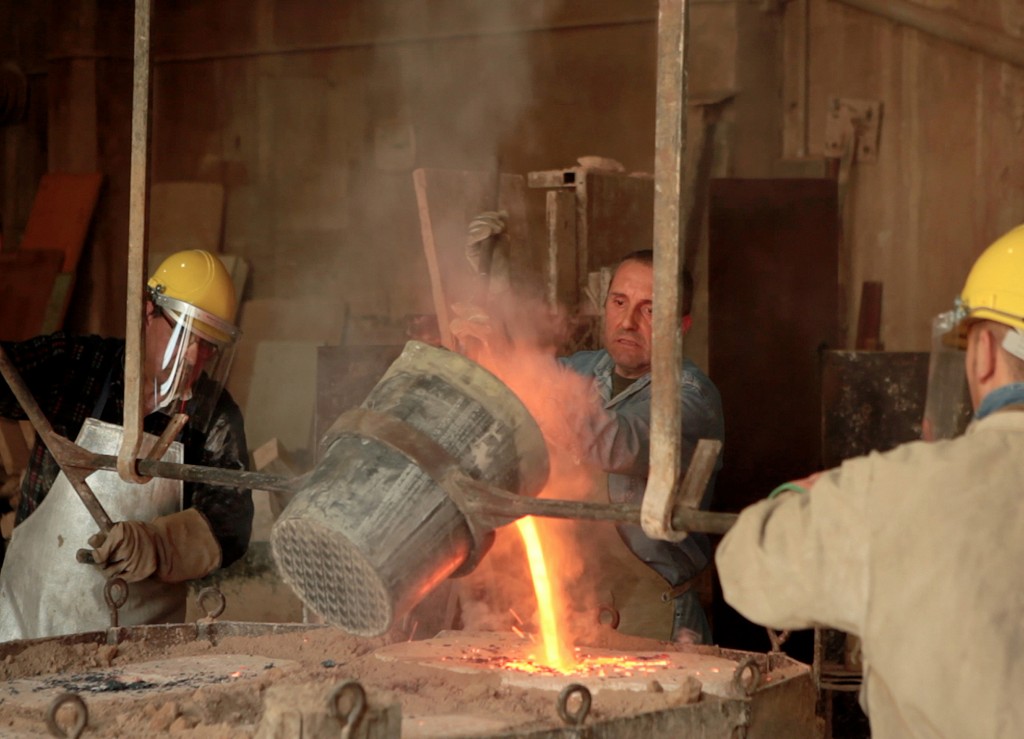 What do you think of the Italian documentary genre? Should it be innovated?

I think I’m not the right person to make any sort of suggestion on the topic. Personally, I prefer images rather than off-the-field voices. I prefer images to interviews, a good audio to many electronic musics. I prefer looking at a story rather than feeling the presence of the director. But, generally speaking, what should change about the Italian documentaries is the distribution: it should be played, seen more in the cinemas. It should take more inspiration from other countries.

What is more fascinating in this genre, for you? In this way of describing reality…

The way in which you can narrate a fiction, passing through reality and adapting it to a story.

As soon as I’ll have time, there’s a project for a documentary (another one with Jon, the executive producer), but it would take us to Nicaragua and would be very demanding. There’s also a book with Velasco Vitali, and one by myself. And then, we’ll see. I’d also like to present the “other’s films”, to tear tickets at the entry, to chat at Rho Cineforum, where I work since 7 years ago.

Now, you’ve got the FIPRESCI prize, how long do you think this award will affect your career? Did you obtain more influence, more resonance?

I think the prize (and the success I got at the Berlin Film Festival) is a way to believe more deeply in this project. It’s a sort of mark of quality on the work. The film received a lot of attention and good resonance (evermore, abroad). But I couldn’t say if it’s because of the prize or because of the publicity among the public. Certainly, the prize we got in Berlin Is a good way to publicize the film. Moreover, in the festival section in Berlin there were 42 films. For what concerns the word “career”, I usually associate that with someone looking behind himself, seeing a clear and rich path. Now, I’m looking forward to it, I see a strange knot of confused possibilities. We’ll see.