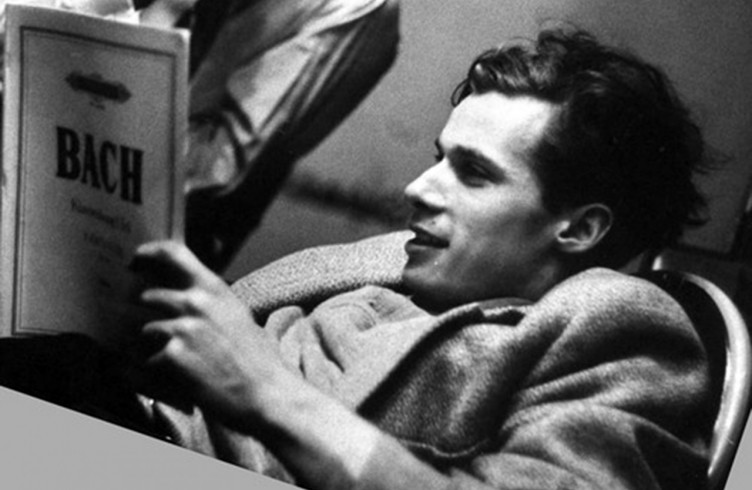 “I’m living this brief night”. An imaginary interview to Gould, in occasion of his birthday (he was born on the 25th of September, 1932)

Mr Gould, where shall we start ?

Dying at that young age, doesn’t it sound like an insult? Especially for a great piano player as you are...

You should ask  god, not me, your observation reveals a classist content. If you raise the myth of the artist, who died too soon and was “loved by gods”, on the other hand it supports a false philanthropic vision, as if my death were an example for heroism and nobility. On the contrary, it was a pure, simple injustice, a bad joke, as every death is.

In your case, death came surprisingly, on a significant moment for your artistic evolution.

Yes, and this was an extraordinary promotional expedient. It’s a pity that it wasn’t me who planned it. Anyway, I used to repeat this to my friends: I never would have lived longer than 50 years. I also took too many medicines. I always hated the pain and, in my last years, I felt depressed.

Let’s talk about your last CD. “Goldberg variations by Johann Sebastian Bach”, which was released in 1982, after your death.

It reminds me of that image of Cocteau, which referred to Proust… Do you remember? The clock kept on ticking at the dead soldiers’ wrists. That myth was caused from a furious execution, to overcome it was shocking and surprising for me: it was a light which trespassed my body. By now, I am that incision. Some people would even say I am Goldberg’s incarnation. What an absurd thing to say.

Aren’t you glad for releasing one of the most loved records in music history?

It depends. You see, what I care about during an interpretation is the paradox. I respect icons, but they’re not my thing, at all. Music should be loved so much that noone could ever “take it on the right side”. I follow the sombre, I don’t care about films which always narrate the same old story. I didn’t decide to be a musician in order to reveal some truths, neither to elaborate convictions. Real art hides and doesn’t reveal. I’m an iconoclast and, since I really loved my job,  I never could accept the idea of conventional perfection as critics describe it: drowsy and everlasting. Reflection is a state of the mind.

But you are still alive thanks to your legendary incisions, which everyone tries to imitate.

They’ve been created in order to create, not to destroy or to raise a model (and this means to destroy, in the end…). I love Bach’s records, the one you mentioned, just because I tried to take in it some expression, rather than the simple execution. In other words, I tried to set free those internal flows that dominate and raise music itself. I looked for the idea of Goldberg and not only for its music. I already had performed it well (if you permit me to say that) in my first SONY recording, which was released in 1955, though the Landowska tried to prevent that to me, in many ways.

And what’s the model you could suggest, Mr. Gould? What do you mean? What’s your idea of an interpretation?

“Model” is a word that scares me. One should play to create something and not to imitate. The simple thought of a model, of something which is different from us, degrades and burdens the artist, with the time. The fact of seeing a performer who is completely controlled by the matter would be a real catastrophe, in my opinion: at that moment he would become a slave of the idea of dominion itself. My fans misunderstood.

Is Gould under appreciated?

Of course he is! I always wanted to re-create an active and alive realism through my piano… Not yet a descriptive and predictable, re-performable representation. I didn’t want anyone to imitate me. I always desperately tried to relive every composition, even while destructing some conventions… But I keep asking you: how could it be different from that? The one who destroys also creates something new. was this even the doubt of having destroyed a crumbling, unsafe building.

Personally, I believe you wonderfully succeeded in your goal. You’ll be convinced of that, I hope…

I don’t know. The witnesses have to say that. All I do is prestidigitation and not art. Evermore, art is perfectly useless since it stopped being dangerous. Everyone is an artist, even on TV: let’s take, for example, that man… (the audio-file is damaged, at this point, all you can hear is some unclear words).

Let’s get back to our point. You often surprised the public with some provoking and shocking statements…

But I’ve always been coherent. 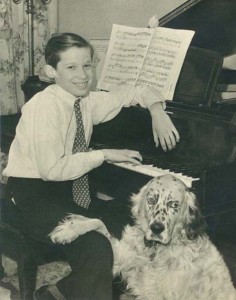 … As when you said you didn’t love romanticism, as everyone does.

I can’t understand that. You claimed the contrary, if I’m right.

You want the truth? Chopin seemed less brilliant than Bach. Do you understand? That is the point. My natural technique, based on articulation, on twitches, is consonant with contrapuntal style rather than with Chopin’s style. He is a wizard of contrapuntal style. But, as for Schumann, this technique sounds as “wasted” and invisible, Svjatoslav Richter played Chopin better than me. And when I think of  Michelangeli , with those fantastic fingers…

But you know my incision of the 3rd Sonate, op 58, I suppose?

It was pointed out as a bizarre execution. It’s not. At all. It’s one of the most rigid ones I’ve ever performed. Take the first tempo, for example: allegro maestoso. I’m one of the few artists in the world who do that. Everyone tends to run, in this movement.

It’s true, and it also is a very passionate execution. It’s brilliant, technically speaking. I like it. But you play a “staccato”, while it should be a “legato”… Your touch, your decisions for the sounds look voluntarily anachronistic. There are some “ticks”. I couldn’t explain some decisions: it looks like you want to surprise, to shock…

I’ve already said that, a lot of times, so don’t ask me to repeat that. The point is always the philology, turning to his author and time. But I’m not Benedetto Croce, who succeeded in introducing history among arts. My goal, as I said, is realism: it’s nothing more than philology towards the performer and his time, towards our time. This isn’t an end in itself; this is a simple means, an organism that must move in freedom and, possibly, must run and fly. The things weren’t revealed in their history and origins, but in their usefulness. There’s a secret correspondence between night and day – they aren’t enemies but brothers as in a mysterious alliance – and the same correspondence must occur between ext and performer. What’s important is how the piece sounds in my heart: I don’t need the signs on the score because they have little relevance to me. I can still add that even the value of a text must relay not only in what it says, but also in what it doesn’t say. As a consequence, every meaningful opera in our present alludes to the future, letting free a space that must be explained through extraordinary languages. The interpreter must, first, act in this space. 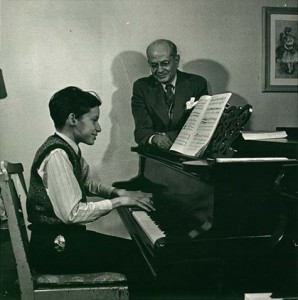 This is the strength of masterpieces! They can grow in time, in an exponential way. Rapidly, more than any geometric progression. This, obviously, is worth for some performances, too.

All this is marvellous. But there’s something I always wanted to ask you…

I’m listening to you.

It’s about Orlando Gibbons. This obscure composer from the XXI century.

But he’s unknown to most people. You must admit that. You defined him as your favourite composer. Is it really him? And why?

What a question! So I can carry on the “épater le bourgeois”. I’ve always done that and I had a lot of fun. (he smiles). Overmore, I re-valuated Gibbons, he gained it.

But Gibbons, tell me the truth… Is he a great composer?

I found everything in my performances.

Believe me, in music there’s only one truth: there’s no truth. In a paraphrase of Bertrand Russel: it’s an art of which you never need to know if what it’s said is true, neither to know what the theme is. This fact doesn’t lack humour! But it’s only thanks to music that intimate life is reborn.

So, the problem of loyalty in music…

The relevance of reality and text, in relation to what I do on the piano, is a circumstance to which I gave less and less importance.My action is turned to the night, to the mystery, to the secrets.

In the last years of my life used to live more during the night rather than the day. I was the driver of the Ghost Boat, a demon blew up my seals…

And what do you think of your compositions?

I didn’t leave a lot of them. I like them, they are interesting but also unimportant. In my ext life I could be one of the greatest composers, even the best one. I can feel it. Except for the case in which I actually were that in my past life.

You believe in metempsychosis, then?

Your untouchableness, Gould, seemed to me a real dilemma. Now I understand it is a mechanism: you’re a pragmatic person, translating dreams into reality.

A mystic pragmatic person, you mean? You want me to contradict myself! I wouldn’t know, I fight for the diversity. I played many authors, many of them were unknown and I served music. I’ve been a puritan with unwanted fornications.

I’ve always been active and I hardly got old. Now, after many passionate nights awake, I’m living this unending brief night, while I got dumb. 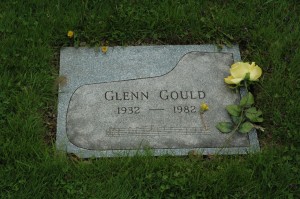 Gould’s grave in the cimetery  of Mount Pleasant, in Toronto

I want to play but I can’t play anymore. And this makes my existence hard, since the desire is pain. Only my notes, recorded, as unstoppable pilgrims, are still living. Until the moment when…

Dear Glenn, it’s not easy to leave you. I pray you. Give us one last piece of advice.

The Barbra Streisand’s blessed uvula of one great singer, from mine and your age.

About the Author: Massimo Giuseppe Bianchi

Italian pianist Massimo Giuseppe Bianchi studied with Bruno Canino. He performs both abroad and in Italy as a guest for some of the most prestigious musical institutions. He recorded for Naxos Girogio Federico Ghedini’s complete piano works, as well as chamber works by Riccardo Pick-Mangiagalli and Ottorino Respighi often including world premieres. He is a composer as well as a versatile improviser, and collaorates with distinguished musicians as Enrico Pieranunzi and Louis Sclavis.